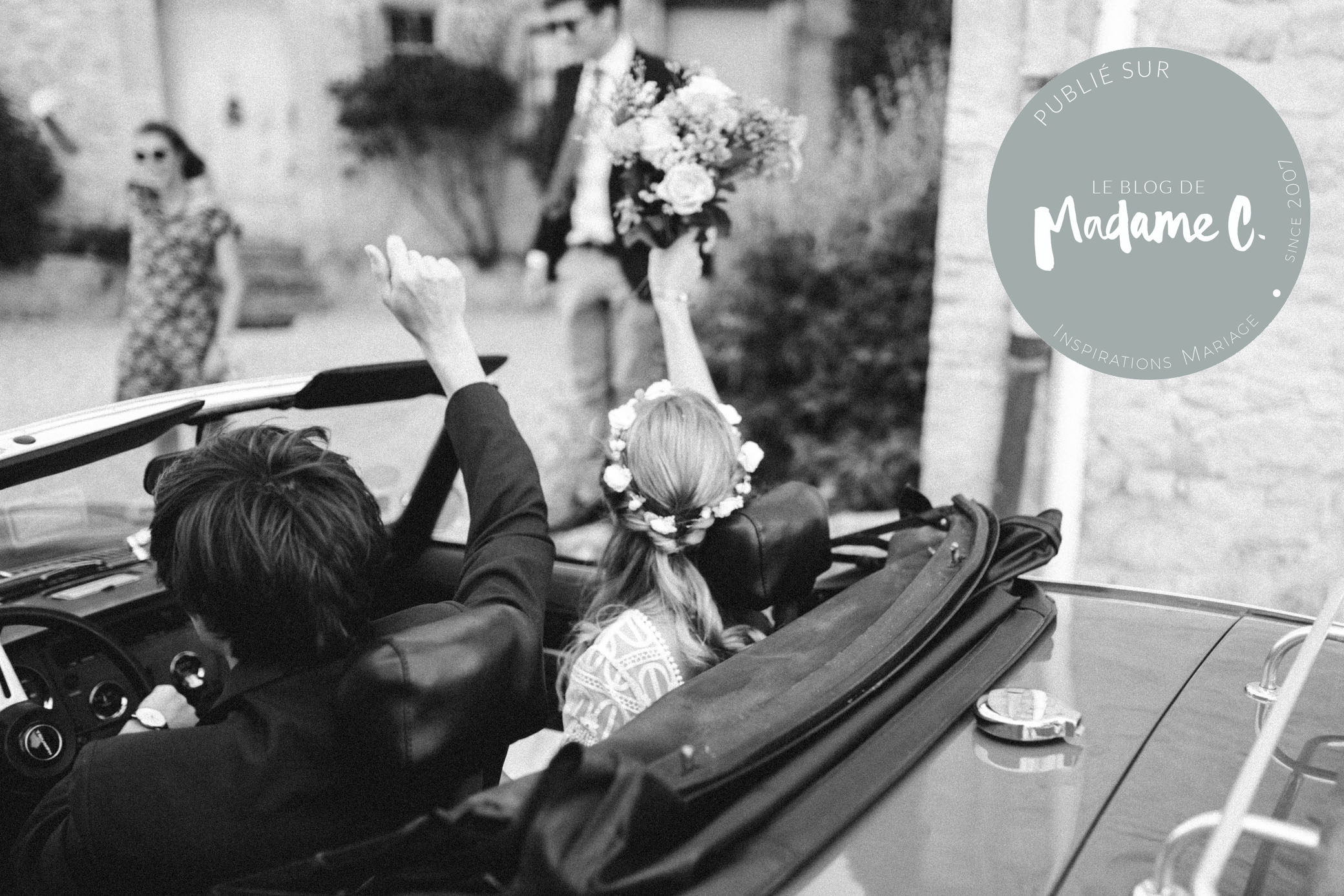 Marion and Quentin’s wedding took place on the 13th of July 2019 at the groom’s family estate.  A place full of memories, the place of his childhood, of his boyhood laughter, transformed for the weekend into a place of festivity, under the shade of the plane trees in Puyricard.

Preparations before the storm

I am always amazed by the transformation of the wedding couples.  They arrive casually dressed in jeans and t-shirts and in 1 hour they don the outfits of a lifetime and prepare to experience an unforgettable moment.

In the large immaculate bedroom of the family home, Marion was wearing a magnificent dress by the Parisian designer Oliver Freine, and in another room, Quentin had chosen a suit by Blandin & Delloye.  The groom’s bowtie was sewn by the designers, and the handkerchief created just for the event.  I realised that each of them had put an enormous amount of themselves into their choices so that this moment would truly belong to them.

I am very lucky to have the chance to attend these preparations, as these are special moments that very few people get to witness.  And I slip from room to room to capture these unique moments, to bring a few words of comfort as the big moment approaches.

It often happens that my brides (a little tense during their preparations) stop a moment, look at me and say ‘Thank you, Anne.’  In the beginning I didn’t quite understand why they were thanking me before seeing my photos, and then they explained to me that seeing me so calm and serene reassured them and helped to calm them down.  I’m always grateful for these moments… I tell myself that I must be doing something right.

Little by little, the earlier tranquillity is replaced by a palpable tension, where each, in their respective rooms, wait patiently (or not!) to go down and see each other.  This, for me, is always the most emotional moment and often when the couple receives the photos, those of their preparations particularly touch them.

And then the moment has arrived.  It’s the most important moment of the weekend, when the wedding couple knows that there isn’t much time left before they join together and say ‘yes’ for life.

A ceremony where everyone is invested

The religious ceremony took place in the 13th century stone church of the village of Saint Martin d’Ansouis.  What a church!  Okay, a little dark, but so beautiful!  An ideal location to exchange their vows and the rings.  By the way, Marion’s ring by Dior was sublime…

A little anecdote…when I went to visit the church a few days ahead of time, Quentin had asked me to verify that there were indeed bells.  He absolutely wanted to hear bells when leaving the church. :p  I found that very touching.<3 And luckily, there were !

Throughout the ceremony, the sisters and brother in laws joined up to form a chorus in the church.  Once again, I realised that each person had given their time and were invested in pleasing the happy couple.  This is something that really touches me because I love my wedding couples and when I see that they are well supported, it warms my heart. <3

Leaving the church, the guests didn’t throw confetti as we often see them do.  In an effort not to pollute the site, Marion had insisted that everyone threw lavender instead.

I found this gest very touching, not thinking just about oneself but also about the environment that sustains us.

Everyone respected Marion’s wishes and it was a very beautiful moment, and what’s more, it smelled lovely.

All the guests were then directed towards the family estate for a cocktail under the majestic plane trees.

It’s at this moment that my first couple session took place.  We took advantage of leaving the church to escape and the couple spent their first moments alone as husband and wife.  This first session is intense, the pressure has finally eased up and I sense that they are both enjoying this moment of connection together.  For me it’s always a moment that I love, I capture these precious moments that will always be remembered.

Arriving back for cocktails, I explore the venue, the tables, the decorations, and the dance floor…

Marion and Quentin wanted everything to take place outside and it’s true that all is transformed when under the shade of the plane trees.

They succeeded in relaying exactly what was important to them, from simplicity to refinement, to elegance.

I walked among the guests, when Quentin approached me and asked ‘Isn’t it now that we should be doing the second session? I really want to be alone with Marion!’

Aaahhh, it was so touching!  So we left for the second couple’s session as the sun was at its lowest.  It’s often at this moment that the light is the most intense, the most intimate.  I felt that they were so happy to spend this moment with each other.  I didn’t have to do much, I let them enjoy each other and I took the photos.

Then we re-joined the guests and I was able to explore the table plans.

Generally, as the photographer, I’m placed at a table a little separate from the guests and I eat quickly so that I don’t miss anything of the party.  But as I approached the seating plan, I saw that they had reserved a place for me with their guests.

It was a real surprise; I wasn’t expecting that at all!

This gesture touched me enormously and allowed me to speak with everybody.

And that continued on the dance floor!

As soon as the music started, everyone headed to the floor to dance under the stars.

I even realised that I was dancing while taking photos! There were great songs; a lot of laughter between friends and the evening went on until the early hours without slowing down.

I think this wedding affected me so much because it symbolised some very important things for me: simplicity, elegance and conviviality.

The night before, during the civil ceremony, homemade quiches had been prepared as well as magnificent wildflower bouquets that now sat on the tables.  Everything had been thought of to follow the wishes of the couple, nothing overdone, everything just right.

Marion wanted to be involved as much as possible by putting her heart and soul into everything, the wedding announcements were reproductions of a watercolour painted by the groom’s mother, the cornflowers in the tables’ centrepieces and in the boutonnieres had been planted in the Spring to be picked the night before the wedding…

As gifts, small vials of perfume personalised with names were given to the guests, I even had one…

I left at 2.30am, but I could have stayed longer.  Now that I think about it, I left just as the mojitos bar was opening, how silly of me!  I feel really lucky to have had the chance to be a witness to these happy moments, to see the evolution of the day and to make these special moments immortal.  By the way, when I sent the photos to Marion and Quentin, I received a call a few days later from Quentin’s brother asking if I was free next summer for his wedding!  It will take place at the same spot.  I can’t wait to see everyone again!